via How to Use Armed Police

In the article “How Use Armed Police” poses the question “What are the situations for which we want people who have the capacity to use deadly force to show up?”  The idea is to have is to have Community Service Officers (CSO) respond to and handle non-law enforcement type calls.

The evidence used to support the need for more CSOs is: because of ongoing tensions between police and African Americans, the broken 911 system, the dangers associated with an armed police response, and the fact that unarmed police personnel already do tasks like write parking tickets, conduct traffic control, and provide funeral escorts that police must rethink the role of armed officers.

Reducing the role of armed police to strict law enforcement would a grave mistake for policing.  It would be a fatal flaw for policing to eliminate the neutral, noncriminal, and nonviolent contacts between armed officers and citizens.

It is understandable why government and police executives would want to have unarmed officers respond to minor nonviolent calls for service.  This would decrease costs for the police department.  It would decrease demands on armed police.  Some police departments already use less trained and unarmed personnel to respond to police calls for service.

There are also several reasons why armed police only answering dangerous law enforcement calls would further exacerbate police community relations.  A decrease in service-oriented calls would decrease the types of friendly non-confrontational interactions that occur at these types of calls.  This would increase the sentiment that armed police in their community are an “occupational army”.  Some nonlaw enforcement calls turn into very dangerous calls where an armed response would be preferable.

The majority of calls for police are nonlaw enforcement in nature.  It is in this area that community policing thrives, relationships are developed, and where the human side of police shines.  Removing armed police (the traditional police officer) from nonlaw enforcement, service-oriented types of calls will only drive a wider and deeper wedge between the police and the community.

Below is a link to the community oversight report 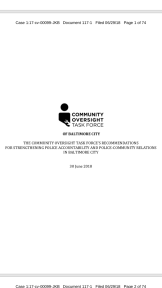 After the passage of California’s Proposition 47, felony drug arrest rates declined and racial disparities among these arrests decreased.
— Read on journalistsresource.org/studies/government/criminal-justice/prop-47-racial-disparities-drug

Journalists resource always presents a more complete view on topics in the news. Make sure to signup for its newsletter.

News and professional developments from the world of policing